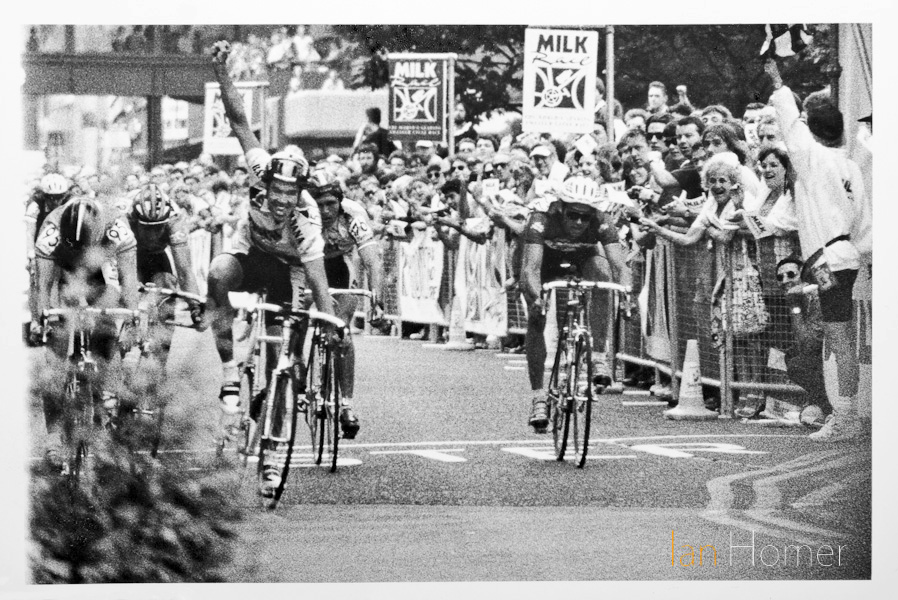 The Milk Race, 1993, Briton, Ben Luckwell (Team Raleigh Banana) steams to victory in Leicester at the end of a 165km stage in the English Midlands.

Why post this archive picture now I hear you ask? Well, 20 years down the line and the Milk Race, albeit a day of criterium races under the same name, is set to make a comeback just up the road in Nottingham. I learned this tid-bit from John MacLeary of Telegraph Cycling (@JohnMacLeary) last night and remarked I remembered being at the stage finish in Leicester in the last one and had taken a shot of the victor. (Incidentally, the race is now known by its other moniker the Tour of Britain after the Milk Marketing Board was wound up and their sponsorship stopped).

I had only got hooked by photography a year or so before and had just finished my undergrad studies in Leicester (Environmental Science) and I recall ringing up the Leicester Mercury at the time knowing I had a good shot on the roll of undeveloped 400 ISO black and white neg film. They declined interest then, which I was disappointed about, but I went on to dev the film myself and this is the result. It’s a pity I had chosen Rodinal as the developer else it wouldn’t have been quite so grainy but at least it now serves as a marker in time.

I searched high and low but only found a small print today – I know there is a negative and a larger print somewhere else but this serves the purpose and I copied it using the DSLR – a far cry from the Nikkormat EL with manual wind-on and relatively slow manual focus lens I used in the first place!