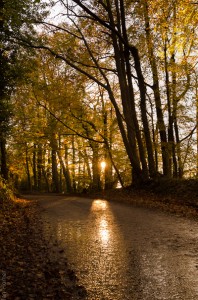 From Newport I took the road through St Julians and out to just East of what once was the Roman fortress of Isca Augusta – now a village called Caerleon  and headed up the Bulmore Road along the East side of the valley.  This is a very narrow lane in parts and goes straight through the Celtic Manor golf resort, which has taken over a great portion of the flood plain. Unless you’re into playing said sport there’s not much to see here unless a big championship like the Ryder Cup is going on.

The small lane winds its way up and down the flank of the valley crossed over by the newer A449 dual carriageway which links Newport to Monmouth.  As it heads down toward the edge of one of the meanders in the river the light can be pretty spectacular in amongst the beech trees early and late in the year (beech tends to keep some of its leaves right through the winter unlike other deciduous species).

This was the first location I decided to park up the bike and reach for the camera.  There is a small stream which drains off the hill in this location and the road bridges it. The sun was coming from a SW direction through the trees and the best shots seemed to be made against the light, letting it shine through the, now, orange and yellow leaves. I scrambled around the bank looking at close-ups and slightly wider vistas and firing some frames off of these, but then I looked up: 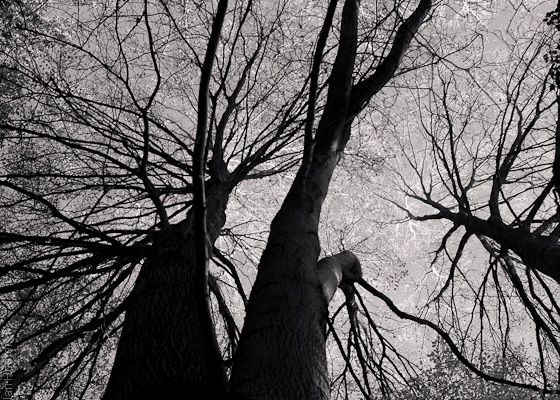 You could see the inspiration for many a cathedral roof just right there.

On returning to the bike the shot at the top of the piece was made, very low down,  with the light from the low sun skimming the surface of the damp lane. Yes, when the weather turns even colder this little lane can be pretty hazardous as it stays dark and cold and retains ice well.

Having ridden this as a loop via Usk on many occasions as a training ride before, I knew that a little farther on as the road bends up after the straight near Llantrisant, there is a stand of trees that looks good with the light coming through it. A smaller tributary flows through the scene too. I made for this location even though it would mean doubling back on myself to cross the river.

By the time I had got there the direction and height of the sun wasn’t as I had hoped but since there has been a lot of rain recently the field was part flooded and made for some interesting reflections. 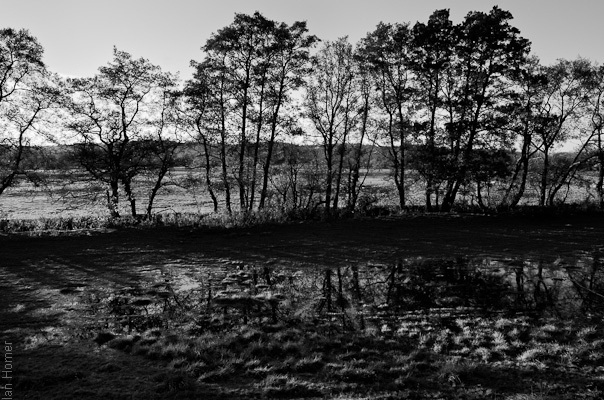 I tried some shots with just the reflections in but I think the contrast worked better and, like the shot with the beech trees, preferred it in monochrome.

Returning back down the Llantrisant straight I took the right turn across the valley which goes to a new-found place to me: Newbridge on Usk. It’s a pity the light had gone from the river as the new bridge – which clearly was once upon a time – is a wonderful arched stone affair with those little alcoves in it to shelter from traffic. The pub next door looks good too. I had to press on at this point though as I didn’t want to be riding too far back in the dark – certainly not before I got back to Newport.

Newbridge sits on some higher ground and the road continues to rise after this, in fact quite markedly and the extra weight of the camera was telling. I decided to take a shorter route and continue upwards rather than a right hand turn I knew would make it less steep but further. I’m glad I did, being rewarded with this view to make a final shot of the day:

The sheep quite obligingly saw me and decided not to stay at their hay feeding thingamejig and made their way back across frame with their now thickening coats back-lit against the setting sun.

I pedalled back from here, happy I’d taken a decent camera along with me for once.

4 Responses to Autumn in the Usk Valley