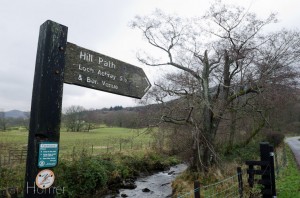 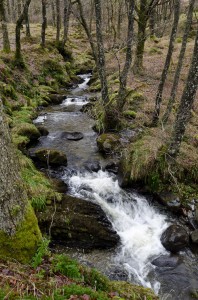 Recent heavy rain meant the waterfalls were at their best even if the light was fairly subdued. 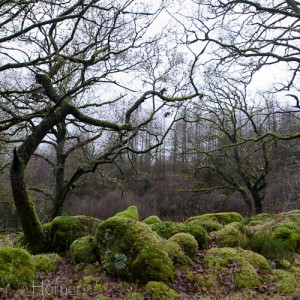 The path leaves the side of the burn now and makes its way through some woods that look all the world like they should feature in a Tim Burton movie. 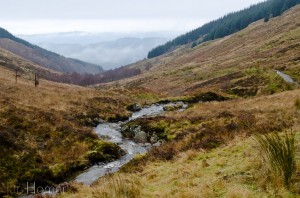 A slightly sombre but still day in the Highlands. Looking back down the burn to Loch Ard

We finally broke cover and strode out into open moorland – the way veers right and makes it back to the burn. A quick glance over the shoulder revealed just how far we’d come. 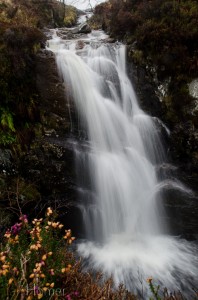 Waterfalls abound in this area of The Trossachs

Time for a quick coffee and a bite to eat next to this waterfall.
It’s too cold to kick back and chill out at this time of year! 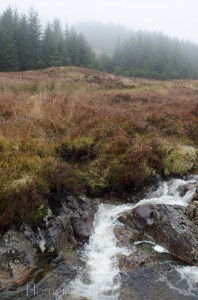 The clag closes in.

As we moved off the cloud got lower brushing the contrasting tops of the pine plantation. 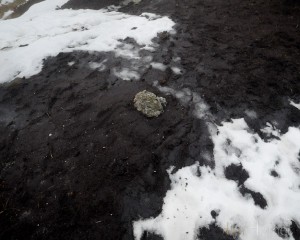 Peat and Snow in Contrast.

We climbed to the top of the col and then drop into where the snow lies amongst peat hags.  Thankfully there wasn’t too much ice though as we hadn’t got the crampons on to deal with that. 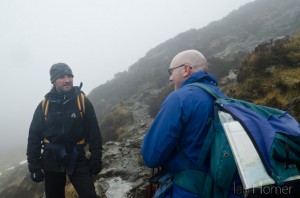 A fellow walker came another route up.

Heading up the rocks to the top we waited as another hiker descends. We then compare notes – he came up a different route that is sometimes inaccessible and confirmed today he’d had some difficulty. 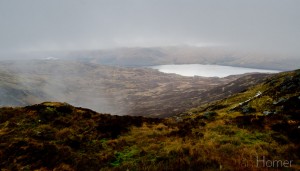 Lunch was taken quickly just down from the summit cairn. There was no view from that location at that time, however, just after a rare glimpse of Loch Katrine came into view as a breath of wind blew some of the low cloud out of the way. 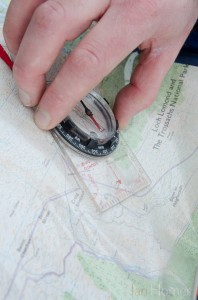 Map & compass. When the mist and cloud descends and you can’t see a path… accept no substitute…

It was high time to take a bearing to double check the route along the ridge – our preferred route off the mountain. The paths aren’t way-marked up on the tops and the snow covers even well worn routes. Mist also serves to disorient. 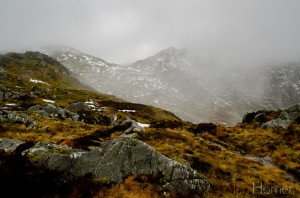 The ridge-line just outlined amongst a shroud of low cloud. 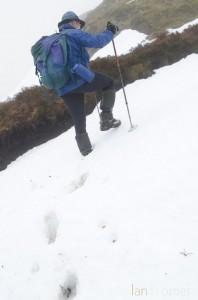 The return leg across the ridge involves a few ‘lumps’

Scrambling up the snowy slopes along what was quite a bumpy ridge was good fun but also could be quite taxing after a while. Best with walking poles to the utilise upper body too. 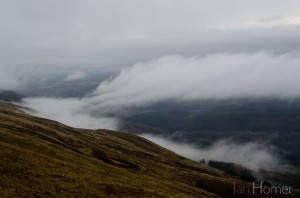 Mist rolls around Loch Ard as we start the descent back down to lake level. 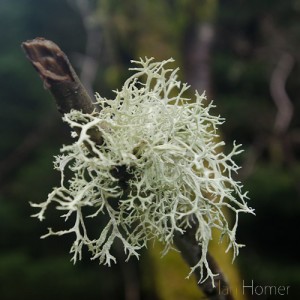 The air is so unpolluted and damp here that bryophytes like the lichen here spectacularly adorne the branches of trees. Loch Ard Ben Venue round

We bounced across the moor and traversed our way down to a forestry track which zig-zagged its way through the trees back to the lakeside. Amongst the mixed woodland more fantastic lichen could be found growing from the branches.
At the end of the zigzag path we had to scale a high gate to get back to the lakeside.

Whilst my brother went for the car I busied myself with making a picture of the superb reflection of the loch. Wedging my body against the rocks I squeezed the shutter on a tenth of a second in fast fading light to get this one. 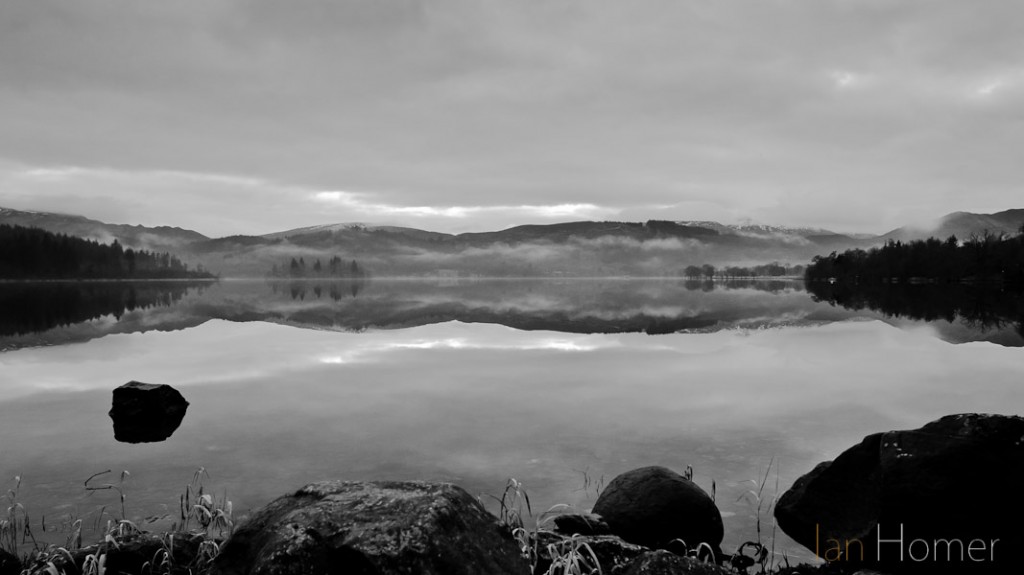 It was a really varied and enjoyable walk which is, I expect, a little more challenging in the winter than at other times of the year. The route is to be found below should you wish to try it yourselves.

Addendum: For those interested in kit lists I had with me this very cut-down set-up: Nikon D7000 DSLR body 17-35mm f2.8 AF-S, flash gun, curly cord and a few cards.