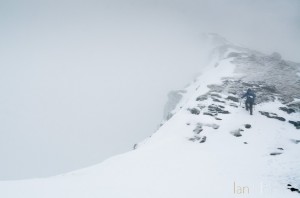 Parking the car by the shores of the gorgeous loch (some spaces were free, at least now, right by the lake shore) we headed out along the lakeside road and then took the 3rd path on the right, after passing Rowardennan Lodge on the left, that traverses its way up the Ptarmigan Ridge. 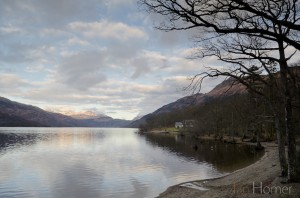 My brother, being more experienced in the hills in winter, decided we should go up this way as it was steeper and then down the less demanding ‘tourist’ track. We weren’t quite sure just how difficult the terrain (read slippery white & clear stuff) would be after getting to the top of the Ptarmigan Ridge but had worked out we could maybe try one or two ways at getting to the summit from there. He does have crampons at his disposal but I on the other hand haven’t – he left his behind – I’m guessing out of the kindness of his heart (?) but took along an ice axe each, for us to arrest any falls should they occur…

The early morning sunshine that caressed the hills as we drove up from Glasgow soon gave way to a lowering cloud base plus localised hill fog such that we were enveloped in the clag as we got up to around 500m above sea level. Typically it’s not long after this you actually get to the first high point on the walk – as you pass a small dew-pond – now blue with ice and round the corner to reach the top of the Ptarmigan Ridge: so called perhaps because of its shape or maybe you can get to see some of these delightful game-birds? None to view this day though even if they were up there!

Ben Lomond climb: crossing the frozen burn (stream) on stepping stones between the Ptarmigan Ridge and the summit bloc.

Lee and I had discussed the mountain weather forecasts (eg.Met Office Mountain Forecast for W. Highlands) and others at length before we set off: the general synopsis was there was nothing to give us too much concern: a fairly high freezing level, no strong winds or precipitation. Blizzard conditions and avalanche risk had put the kibosh on a trip he had planned with a group the day I was due to arrive in Scotland, so we were glad there wasn’t anything likely of that ilk. The different almanacs reckoned varying levels for cloud base height depending on where you were and the possibility of clearer weather coming in for the South East of the region. We concluded this hill mist/cloud was likely to be a fairly local phenomenon due to there being snow at this height and not much wind.

The path from the top of the ridge descends slightly now and we opted to take a route slightly off line to avoid ice but consequently ended up in what was quite deep snow! Then we had to cross what would normally be a stream via some stepping stones – it was frozen over so I let my younger sibling go first (how generous of me!). It made for a picture opportunity anyway…

The trail, if you could decipher it, went round to the North-east now and then veered Northwest to go up a very steep section which would normally be a rocky scramble in Summer. It rises 214m (700ft) in a little over 500m (just over 1/3 mile). Of course now it was covered with snow: time to kick steps in and have the ice axe ready in hand. 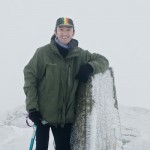 Ben Lomond – the author poses – it’s all white at the summit trig point.

On one particular bit I had trouble keeping a footing even though I had jammed both pole and ice axe point in to help stabilise – the foot I was putting my weight onto just kept sliding. Eventually I got up that but a little further on, when we encountered a rocky outcrop, I ended up using the business end of the axe to lever myself up. Before we knew it and even a surprise to Lee who has climbed this in a warmer time of year, we were at the summit triangulation point: 974m (3195ft) up. Unfortunately the view was, well, all white! 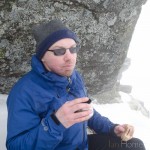 Ben Lomond:Time for lunch, sheltering from a strengthening bitter cold wind under a rock.

After a couple of obligatory pictures of each other for posterity we moved along the summit ridge and I suggested a place out of the increasing wind in the lea of a large rock for lunch. We did go past but as there were signs the clag might be easing, we retraced, then my brother said he thought it a good place…as if he had the idea first … typical!

Only the second walker we’d seen all day (the other was way ahead up the Ptarmigan as we started) stopped by as we were sat down – he had come up the other way and was thinking of doing the reverse of our route. He’d got the right kit, including the crampons on his boots, but decided not too in the end as we saw him repeatedly on our descent. 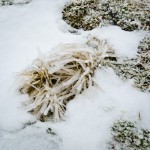 Ice encrusted grasses on the slopes of Ben Lomond.

Lunch duly devoured, we headed off along the summit ridge, taking care not to go anywhere near the NE side which drops off a cliff edge – one could make out a snowy cornice in places so it’s best to keep well clear. As we hadn’t got crampons it was easier to find the tussocky grass & heather as that afforded better grip even though it had ice on it it was of a sharp crunchy kind.

Lee went on ahead – the picture at the top of the article shows him as we were going across the ridge at this point, ice axe in hand.
From this point onwards the hill fog thinned and the great dramatic vista could start to be seen through the veil. We were so glad we took that time out to eat! 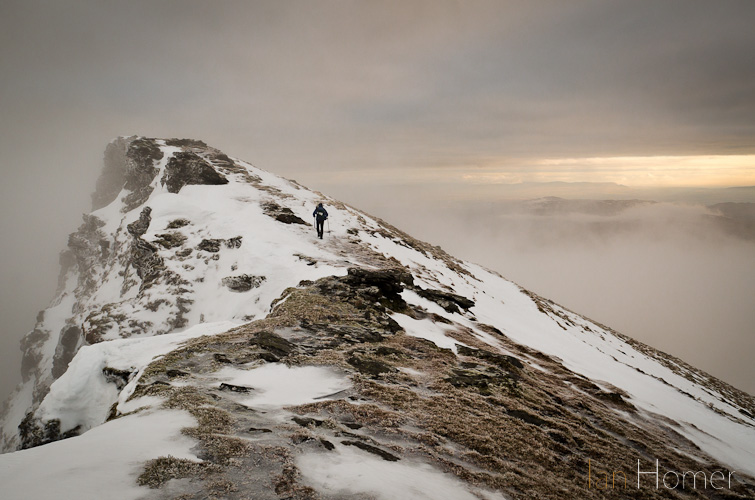 Picking the way along the snowy summit ridge – the mist suddenly clearing.

Instead of taking the tourist ‘motorway’ off the ridge line we persisted as the weather was now on our side. This is what makes it all worthwhile, wow! 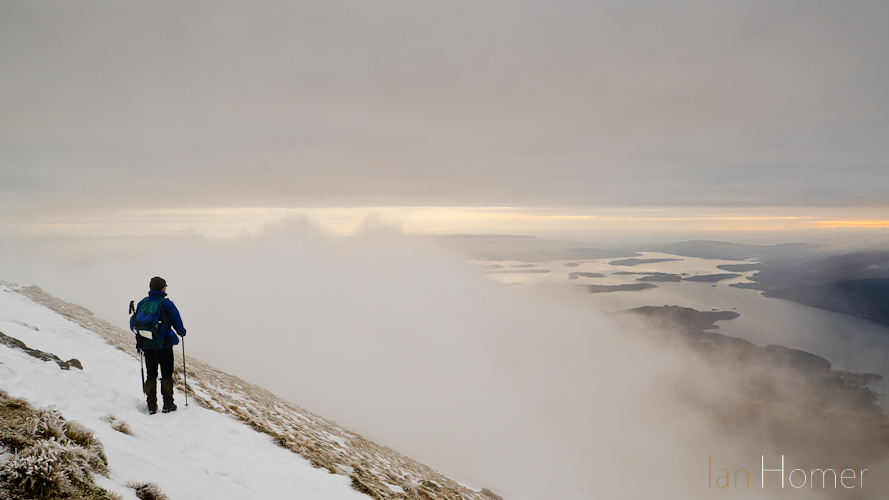 We were joined by the walker we saw previously: turns out he was local to these parts. The three of us tried to make out the landmarks we could see. In the far distance we reckoned we could make out Ailsa Craig off the coast. 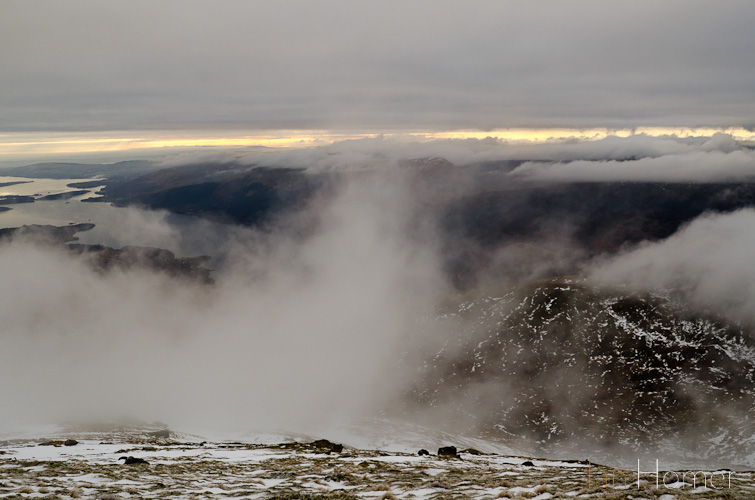 Looking Westward as the mist cleared. 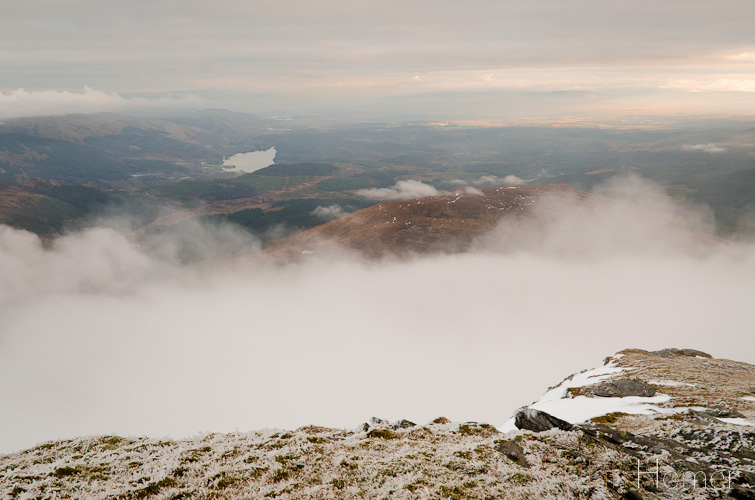 Bouncing in and out of snow drifts sometimes knee deep in places we rejoined the tourist route as best we could – it was actually too icy compared to the ground around it.

We came across more walkers as we got down to the ill defined minor summit of Sron Aonaich: a couple with a dog and then a younger couple later on who, according to the local had been falling over all the way up. We now understood why: they had fairly good clothing and a walking pole each, but on their feet: trainers. I did try and convince them that they shouldn’t really carry on by telling them that I would have been better off with crampons. Trainers have neither the grip nor are they waterproof or have any ankle support. It was getting to be too late to being going up having gone half two in the afternoon at this point.

The so-called tourist track, normally a rambler’s motorway, is just covered in ice and snow.

I wonder whether I should have been more forthright and told them directly not to go on. The last I saw of them they were still headed in the direction of the summit. I’ve checked for reports since but nothing has cropped up so I assume they got off the mountain ok. It is vital to have the correct equipment and know how to use it on any walk but it becomes acutely important in Winter.

It’s notable that two young women who we encountered coming up the tourist track slightly further on asked us what it was like up there and although they were well kitted out, decided to head back as time had marched on.

We had time for one last mini break for a coffee out of the flask. Ravens had been seen and heard more often through the mist with their ‘pruk pruk’ calls all day. One was quite close up on the Ptarmigan ridge earlier. 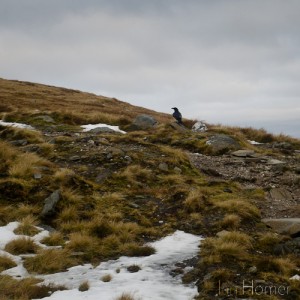 A ravenous raven after scraps of food.

Whether this was the same giant of the Corvidae family or another I’m not sure but as we stopped for a bite you could see it flying from one rock to another in the near vicinity, calculating and inquisitive. It became apparent as we left on our way what it had been waiting for: it flew immediately over to where we had been hoping we’d left a morsel or two. We hadn’t as it happens but doubtless, as pickings become slim at this time of year, they must still find it a worthwhile ploy.

The path became much less snowy as we descended now and although it should have been easy – I was finding it much tougher going and couldn’t keep up with Lee: my boots had been impacting on my ankles and rubbing, especially the right, as some snow had lodged and melted between the sock and the cuff of the upper. It was pretty painful with every step downwards but I had to carry on regardless. At least we hadn’t got too much left to do. 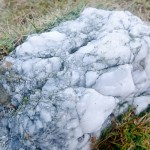 There were nice examples of the varied geology of the area all around: from metamorphic micaceous schists on the Ptarmigan Ridge to lovely quartzite boulders such as this one. 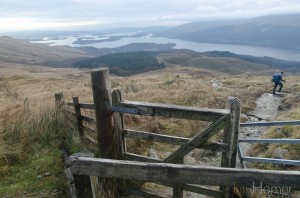 It wasn’t long until we were down below the farthest reaches of the snow and back into fenced territory again via a gate.
One last push along the very well trodden and somewhat eroded track and a very satisfactory second day in the mountains was firmly under our belts. In all it had taken us around 5 1/2 hours to complete the 7 mile circuit, the route of which can be found below: